In order to properly obsess over a playset you have to appreciate the cartoon/movie most toy lines are based on.

Mighty Max is fairly unique, as the toy actually preceded the cartoon show. Check out the pre-cartoon TV spot for the Mighty Max Trapped in Skull Mountain set and it's pretty clear.

The funny thing is each set sounds like the title of an episode, so maybe they already planned on creating a cartoon, they just didn't want to wait to start pushing the toys before the cartoon was ready.  Max was animated in the Skull Mountain commercial.

Without further adieu, YouTube presents Blood of The Dragon:

Cheesy, yes, but I lived for this show when I was a kid!  It was pretty dark.  Drinking blood, even dragon's blood, would be unheard of in today's cartoons marketed to youngsters.  There is even an episode where a bloody crime scene is shown and Max is worried his friends may have been murder victims. Moving on to the cast:

Max - Rob Paulson!  Basically the human boy version of Raphael, and the same voice actor too.

Skullmaster - Tim Curry!  Seriously, there could not be a more perfect choice for Skullmaster.  He really delivers the death threat lines perfectly!
Felix - Maxes best friend. Voiced by Corey Burton, now the narrator of Future Worm.
Virgil - Tony Jay! Top notch casting for this show.  Tony has a great voice and he's perfect as Virgil.
Norman - Richard Moll. I don't believe he ever did any other voice acting, but he's great.  Norm is the muscle and has some nice one liners.

Overall, this episode doesn't translate perfectly to what is featured in the playset.  The Lizard Mutants in the playset look nothing like those in the TV episode.  The island itself is obviously way different. It is a nice adaption however and is close enough.  Next post I will take a closer look at the actual playset.

Did you ever watch Mighty Max?  Do you remember this episode?  Did you ever compare it to the playset?  Let me know what you think in the comments below!
Posted by Mason at 8:47 PM 6 comments:

One for each month of the year.  I will focus on and obsess over these playsets every month accordingly:

May - The Family Play Castle - Sadly no commercial for this awesome set.  I used to play with this set at my aunt's during the annual Easter get together.  I love that trap door!

Fun facts about the different variations at Anne's Odds and Ends.

August - Imaginext Bat Cave - It may be the best bat cave so far!

September - Micro Machines Space Galaxy Command - How does this not have a commercial!? 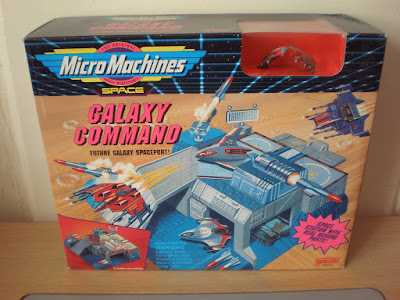 October - Weeble's Haunted House - This one was a new discovery for me.  Found a thrashed set for super cheap!  Love that shaky camera work at the end.

November - Filmation's Ghostbusters Ghost Command - Maybe one day I can own one?