I recently found this cute little PPP (Peter Piper Pizza) mascot to add to the food mascot plush collection.  He was 50 cents at the DI, score! 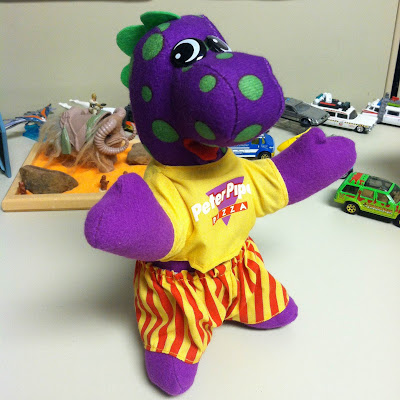 When I was a kid we didn't visit the Sandy City PPP very often, so it was always a special occasion.  A while back PPP closed all stores in Utah, and I thought they were done, but they do still have locations in other states, and even in Mexico.

I didn't even know PPP had a dino mascot.  I used to own a Little Caesar mascot as a kid.  I would love to complete the pizza trinity with Little Caesar and The Noid.  Or better yet, some Rock-a-Fire Explosion plushies!  I wouldn't pass up Chuck-E-Cheese plush toys either...

Anyhoo, PPP was my earliest memories of playing Mario Brothers on an original arcade machine.  When I couldn't go to PPP, I would challenge my brother to play the 2-player battle mode on SMB3 (Super Mario Brothers 3).  I played that game to death!

The moral of the story is pizza places were awesome back in the 80s and 90s, and they are pretty lack luster now.  That may be my nostalgia talking, but I think pizza places are a lot less fun now.  We still have a local Jungle Jim's.  That place is falling apart now, and the rides and games are pretty lame.


When I searched for commercials online I found a bunch of weird YouTube videos about Caillou and family misbehaving at PPP... The internet is a strange place.


During my research (Google searches) I found out that PPP bought out the other PPP (Pistol Pete's Pizza).  Check out this awesome commercial!  I really wish I could have tried it before it disappeared. (Pete's also featured the Rock-A-Fire Explosion.  I thought the show was exclusively at Showbiz Pizza.  The More You Know!)

Anyone remember Discovery Zone?  It was a sad day when the Sandy Mall location closed.