From The LEGO Bin: Fright Knights

Fright Knights was a short lived LEGO Castle sub-theme that ran from 1997-1998.

The only set I remember having was 6087 Witch's Magic Manor. It came with all 3 Fright Knights, Willa The Witch, a Forestman, and a Skeleton. Sadly, it did not include Basil, The Bat Lord himself. Nor did it include a black dragon with flame wings.

The coolest figure from this set has to be Willa The Witch. I imagine she was the one calling all the shots, not Basil. She was the first LEGO witch mini figure and the first to sport a black version of the Wizard's Hat. I also like her alternate dress leg-piece. It really completes the look and makes her a little taller too.

Everything about her is cool, from her one tooth to her spider broach. The frog is a newer addition, but he fits right in.

I still have 2 of the knights intact, but one of them seems to have lost his head. That's just the risk you take when you swear your allegiance to the Bat Lord. 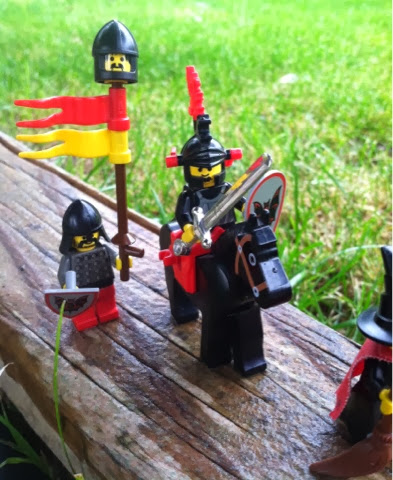 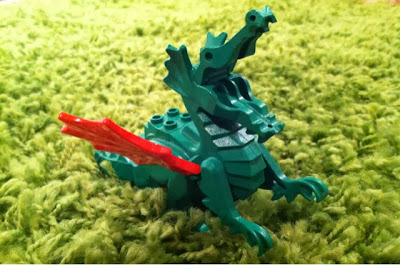 The Witch's Magic Manor set also came with a green dragon, which I still have. Sadly, she is missing a wing. I also used to have a little bat figure, but that's also gone missing. Bits and pieces of the Skeleton have also been scattered to the wind.

I love the newish LEGO Minifigures series! Number 1, they're the cheapest new LEGO sets available, number 2, they saved me from my "dark ages", and lastly they tie in rather well with many Classic LEGO themes. There are all sorts of techniques for discovering the contents of each blind bag. I've always used "the feel technique" where I just feel for the components that are unique to the figure I want. Hasn't failed me yet!

If anyone has any Fright Knights figures, sets, or accessories then I might be up for buying them or trading for them. So don't hesitate to dig through your old LEGO bins. If you're getting rid of any LEGO don't send it to the DI, send it my way. I will be forever grateful!

This has been Mason with the first episode of "From The LEGO Bin". Watch for more episodes as I dig through my old bin of LEGO and see what else I discover. Thanks for watching and Happy Halloween from Willa The Witch!

Classic-Castle.com
Posted by Mason at 3:33 AM