Duffy The Mascot is an early film incorporating stop-motion animation.  The film is now open domain, so you can find it on YouTube.  The Devil's Ball animated scene is pure nightmare juice!

Toys in The Attic (2009)
The French seem to have a knack for creepy stop motion films.  It just so happens that 'toys in the attic' is a euphemism for insanity.  Makes sense.  Toys in The Attic can be found on Netflix currently.  That Dr. Roach is the creepiest thing in the film by far! 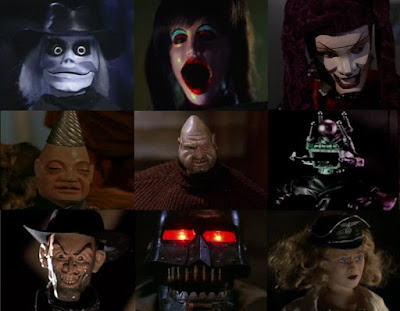 I've actually never seen the Puppet Master movie and have no interest in seeing it, but the puppet characters look awesome! And, of course, action figures were made.  It would be cool to see the action figures and/or puppets in person, but I don't think I would want to keep them.

Puppet Master Vs Demonic Toys is a non-canon made for TV crossover.  Seeing as it was made for TV maybe the gore and any "suggestive themes" would be a little more tame.
Posted by Mason at 11:18 AM