Since it's the last day of Shark Week I thought it appropriate to share Dusty and Jerica's collection of Hot Wheels Sharkcruisers. 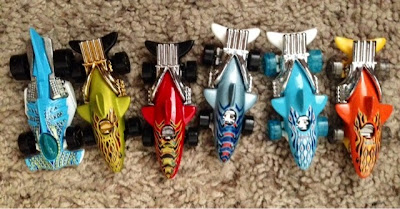 Several varieties of the Sharkcruiser have been released, I think there are 30 or so variants now! There is also the Hammer Down, a Hammerhead Shark inspired car. Now, the funny thing is half of these cars were a gift from yours truly. My little bro hasn't held his interest in toys nearly as much as myself. In fact, he's turned out to be more of a jock. He didn't even know what an Ewok was! I'm still trying to convince him we need to have a Star Wars marathon, but amazingly he refuses. However, he did agreed to a TMNT marathon. Baby steps. 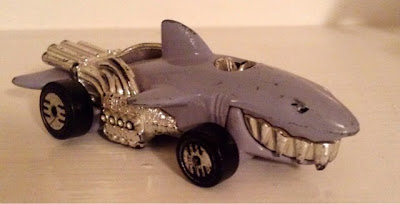 My brother and I shared pretty much all our toys. Above is our original Sharkcruiser circa 1987. He's a little worse for wear, but he's still awesome! It even reads,"SHARK" right there on the side. I've been holding on to it all these years. It's time to pass the torch.

Since my brother is obssesed with sharks it gives me the perfect excuse to buy him shark related toys and rekindle that childlike wonder. Then maybe we won't have to talk about sports so much. Maybe I'll start collecting Street Sharks figures for him.