With the help of my good friend Frank of Little Weirdos fame, I discovered a brand new, little known toy line known as Battle Warrior. Frank introduced the world to the Military Vs. Monsters series of army men style toys. John Gaither, of the legendary blog Robot Monster Space Superhero, got in on the fun as well and posted a review. After seeing all the great sculpts in there I just had to have them! Luckily I spotted the last tube of MvM, and one more tube of Ninjas Vs Robots to boot! 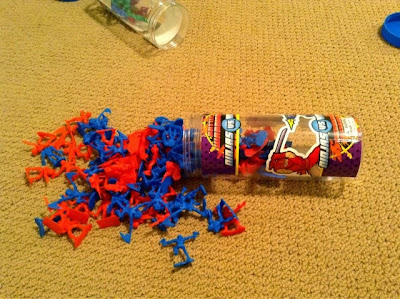 Since we've already pretty much covered our bases with the Monsters, I'd like to introduce Blue team and Red team of the Robot-Ninja universe, by Blip Toys. 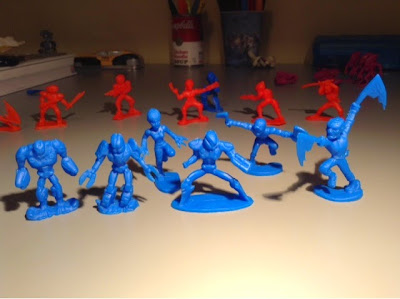 The interesting thing with the NvR pack is the color change. With the MvM pack the monsters are clearly Team Hot Pink and Military is Team Classic Army Men Green. NvR changed things up and made both Team Blueberry and Team Blood Red half robot, half ninja! Check it out!

If I had to choose favorites my first choice would have to be the Samus-Style Megaman on Team Blue! 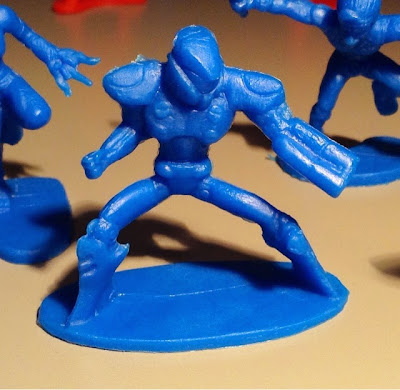 There are a few subtle differences, like a three-barreled gun on the left hand instead of the right, and a slightly different suit style, but this is clearly Samus Aran. Pretty cool! 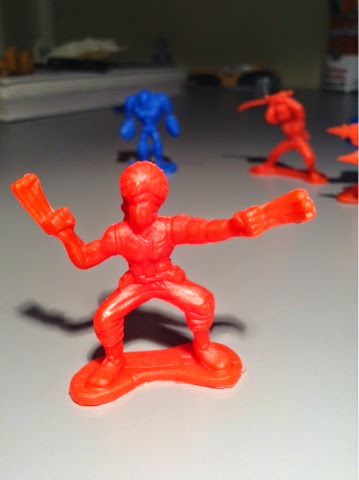 And my runner-up is Vega, from Street Fighters! That's 3 knock off video game character sculpts in one tube of NvR. The set of 96 figures cost me just 5 bucks. That's like a nickel a piece! Sure, they're cheap, but man are they awesome! I don't shop at Target very often, but when I do it's because I heard about an awesome toy like this. So go raid your local Target today! I in no way represent Target stores or its affiliates.

Has anyone else come across these amazing toys? Are there any other Army Men style toys you'd like me to know about? Please let me know!