I snagged me a new bootleg toy from the dollar store, an eXTreme Fighting ACTION PLAYSET. It's the hottest new thing! 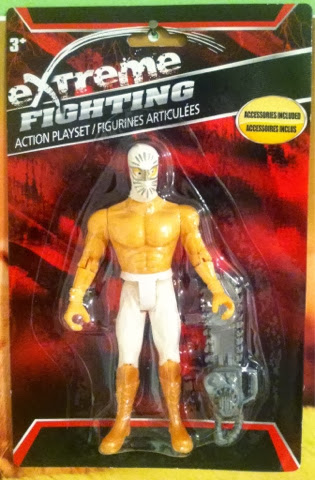 Now, normally I would never buy a bootleg wrestling toy, but there was something very special about this "playset" that you may have noticed.
HE HAS A FREAKING CHAINSAW!!!! What kind of luchador (this figure is in the likeness of Mistico, by the way) carries around a friggin' chainsaw!? Extreme Fighting is right! Makes the Xtreme Fighting League look like a joke! I will most likely keep this one on the card simply because one would ever believe it came with a chainsaw if I ever opened it. Besides, the toy quality is so crapy that I might as well leave Mistico forever encased. Sorry buddy, looks like you'll never get to fight in the ring with your trusty, rusty chainsaw. It's a crying shame.

It kinda reminds me of the Thundercone in the Napoleon Dynamite Animated Series.

Since we're on the topic of bootleg toys, I thought I'd show off Crypto 137, from the Destroy All Humans video game!

This cute little guy came in a Goodwill grab bag along with my Playmobil mummy. He's pretty cool for a bootleg and he's creepy as sin! I wish I had the ray gun he normally comes with. Oh well, he'll just have to use his telekinesis or something to destroy all humans. You'll find a complete review of this "Alien Power" toy at Poe Ghostal's Points Of Articulation. "SAVE OUR PLANET"!