I can think of no better way to celebrate Boss's Day than listing out my top 10 favorite freaky video game bosses. Here we go!

The first boss in that bizarre N64 title, Hybrid Heaven. I found this game at Shopko on the clearance rack for like 5 bucks. I figured it was worth it and I was right. I love this weird game!

The Monster is part T-rex from Jurassic Park, part Xenomorph from Aliens, and I can even see a little bit of Isz in him. What more could you ask for!?

The first time you encounter The Monster you just run like crazy, but later you have to face him head on, plus he has a new fire breathing girlfriend.


The idea of a robot having a ghost is just so cool to me. It settles the age old question, does AI have a soul? Don't worry Tin Man, you have a heart after all!

8. Wart from The Legend of Zelda Majora's Mask


(Skip to Wart 5 minutes in to the video)

Majora's Mask has several spooky bosses, but I really like this one. A giant eyeball surround by pink squishy things. What's not to love?

Wart is found in the Great Bay Temple and The Secret Shrine in Majora's Mask. He scared the pants off of me when I encountered him in the Secret Shrine because I totally didn't see him coming.

"Renon, an enterprising demon with gentlemanly manners, had a unique take on the 1844 reappearance of Castlevania. Historically, individuals from all walks of life have found their way into Dracula's stronghold. Their reasons were disparate: some were lost, others kidnapped, and even a few explored the castle's depths to confront Dracula. No matter their objective, those people needed supplies. While the odd Pot Roast found in a broken pillar was enough to satisfy the most resourceful adventurer, Renon guessed that there might be a niche market he could exploit. Thus, he distributed several contracts throughout the castle and its grounds. Picking up one of these scrolls would summon Renon with a briefcase of goods at the ready. Renon resorted to mercantilism because, although "It is shameful for a demon to be working, one needs gold even in Hell these days."

"If the player has bought too many items and spent 30,000 gold pieces with Renon before the player encounters Dracula, he explains what the contract says. If you spend over 30,000 gold pieces then you have agreed to sell your soul to Satan. If this happens, Renon will transform and challenge you to a fight, using similar moves that Death used (Fireballs instead of Scythes and summoning the demonic fish)."

I couldn't've explained it better. So awesome!

The concept of batteling and ultimately killing Death himself was such a bad A concept to me when I was a young lad. I totally killed Death!

This game is brutally hard and I have yet to reach the final boss. The first time you reach the final (or so you think) boss Astaroth you find out that you have to go through every level all over again to truly win! I doubt I will ever beat this game, but one can hope that someday I will conquer Satan!


The T-Virus has some strange effects on plant life!


Once again, it's hard to pick just one favorite boss from a game series full of winners. Plant 42 just has that special something to be my favorite. I guess I have a soft spot for plants.
3. Red Falcon from Contra (NES)


Why is this boss called "Red Falcon"? Because it's red I guess, who knows?

Thank goodness for the legendary Konami Code, withouth which I would never have beaten Contra! This boss looks so familiar, where have I seen this before?

It's hard to pick just one spooky boss from this "masterpiece", but I think it's safe to say The Giant Dead Spider is the funniest and is therefore my favorite.

You don't even have to fight, you just win automatically after the deceased arachnid says,"Sorry. I'm dead."

He's an extremely easy boss, but he sure is memorable! He's a big pile of goop that belches at you! I'm sad to say I have never faced this foe myself, but I do remember watching my friend Karl play Earthbound. Belch is an instant classic boss. I'm excited to see what Mother 4 has in store!


Honorable Mention-Hierophant from House of The Dead 2 (Arcade)

I thought I'd at least mention Hierophant, since I own the toy version of him. I remember battling this nasty critter with my brother at the arcade. It was pretty fun. 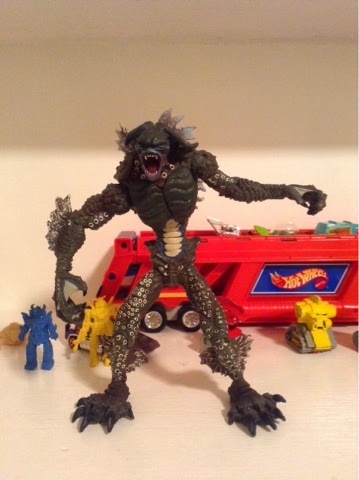 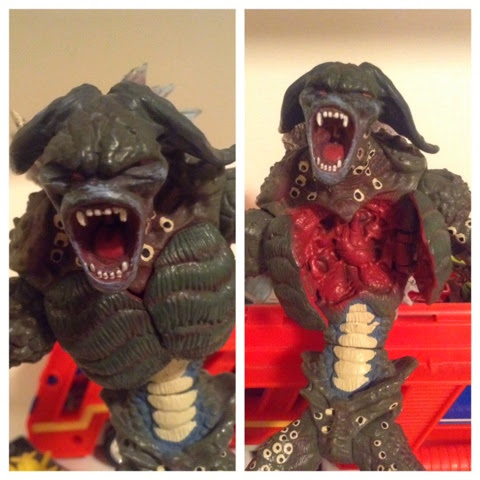 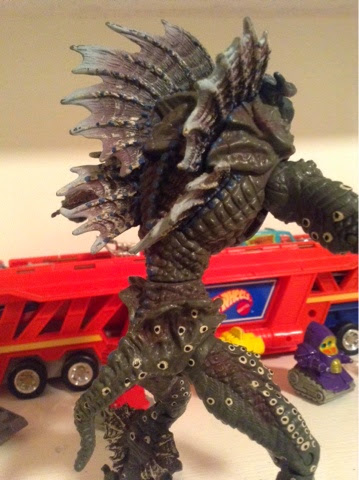 Heirophant was a gift from my folks. I lost the trident and the companion Mofish figure that came with Hierophant. I onced used him in a stop-motion animation project for a class I had in high school. I wish I still had the VHS tape it was recorded onto.

Happy Boss's Day to all you scary bosses out there!

Who did I forget? Who's your favorite boss?