The one that got away 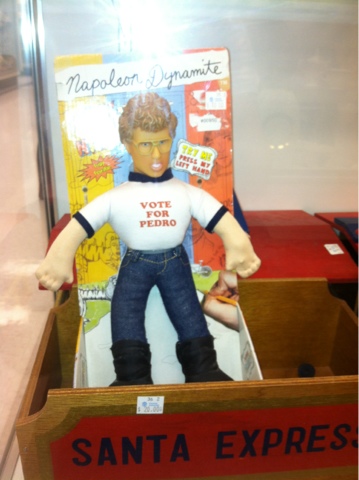 Just look at him in all his derpy glory! But come on, $10!? That's daylight robbery, practically retail!! This is a thrift store, not an antiques and collectables shop!

Well, I decided to let this one go. I thought maybe they'd drop the price later, but I wasn't surprised that Napoleon was gone a week later. Some Granny probably emptied her coin purse and bought him for her grand kid. I swear, so many elderly women go into the DI with money to burn on the darnedest things.

Will I ever see a Napoleon Dynamite Doll again? Probably not at the DI, but if I wanna pay top dollar I found several on eBay. But where's the fun in that? It's the thrill of the hunt that keeps me collecting; that holy grail of a find that's underpriced at a dollar. Next time Napoleon, you will be mine!

Did you ever see something amazing, but let it slip away? I wanna hear about, so don't be shy and tell me about it in the comments.