Hello Boys and ghouls, I'm back once again with some Summer's end spookiness, Lagoon's own Terror Ride and Dracula's Castle! 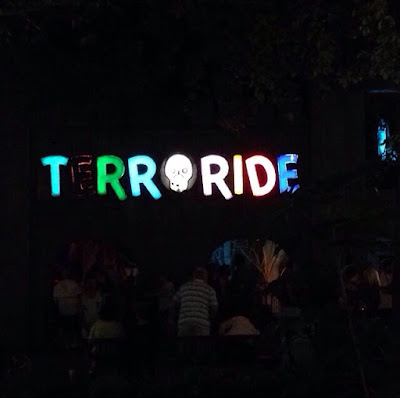 Now, I only managed to snag one photo of Terror Ride when we went to Lagoon last month for my company party.  You may remember my mentioning the local amusement park as the greatest band in the world, The Aquabats, filmed there for an episode of The Aquabats Super Show!; and it looks like they filmed during Frightmares, cuz there's this really sweet giant spider.

Anyhow, I just wanted to share the AMAZING mural that used to grace the entrance of the Terror Ride. It has since been taken down, but thankfully is has been safely displayed in one of the annex office buildings at Lagoon. I could rip images of the mural, but instead let's just visit Jeremy Herridge's Flick'r album for the best pics I've seen of the Terror Ride mural HERE.
Posted by Mason at 7:41 AM