Ah, Tombstone Corners! The cheap Dollar Tree version of all those overpriced Halloween village collections we all wish we could afford. Tombstone Corners first made its appearance in 2014 including plenty of cheap, awesome figurines with sloppy paint apps.  They were such a hit with the kiddos that they are hitting stores again this year with a bunch more figurines! Lets take a look at the 2014 and 2015 Frankenteam! 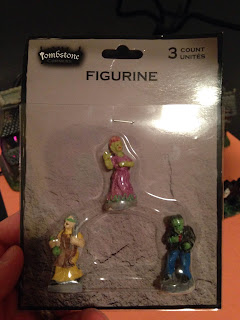 This was such a great set, I had to snatch it up last year! What good is a Halloween village without at least on Frankenthing?

Frankenstein's Monster almost looks like a normal human in costume, what with his suit coat and blue jeans combo. The redhead bride could also be in a costume, but who can tell for sure?


If they are all just playing dress up then Dr. Frankenstein is really in character! This feminine take on the doctor is really refreshing.  They're doing it with Ghostbusters, why not with Frankenstein?


This was the first 2015 set I came across and the grin on my face looked just like Igor's!  The young scientist proudly displaying a brain is great. I wonder what her relation is to the older mad scientist fellow.  Perhaps her father?  He must be so proud.

What do you think of Tombstone Corners? Have you picked any of these up? Have you ever built a Halloween village? Any advise on terrain? I just used construction paper.  I need help!