The Magical World of The Predasaurs - The Commercials

So recently I made a trip to the good old Family Dollar. You never know what weird crap you might find there and when I paid a visit the other day something magical happened.  I found these: 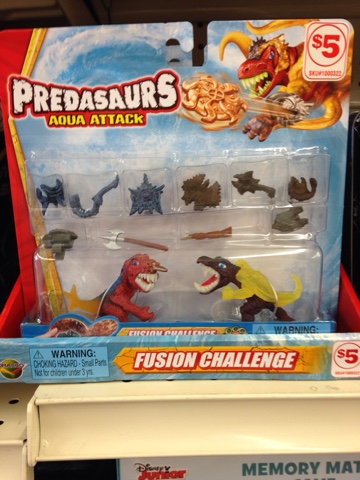 As I did some research on these strange toys I found something I have really missed, super cheesy toy commercials!  Predasaurs has loads of great classic style toy commercials, enjoy!

This commercial has several different language versions. This is the English version and it is amazing!


Here's a slightly different version with emphasis on the glow-in-the-dark feature.

A cancelled cartoon trailer? When lava and crystals containing different dinosaur DNA combine the Predasaurs were born! As they find random giant weapons scattered across prehistoric earth, they battle for supremacy!  Watch as their teeth grow to Jurassic proportions!

Apparently Simba created a giant battle arena for the Predasaurs.


I love the 2-headed dragosaurs!


Mr. Ashens was not impressed with the crappier blind bag version of these

Add your own announcer!  If I had video aditing skills I would totally cut my voice into this commercial! I do have a decent announcer voice.

This commercial features a catapult! Sweet!

Tune in next time and we'll take a closer look at Predasaurs: Aqua Attack.
Posted by Mason at 8:02 AM