I Want My Mummy!

Okay, this is the last one, I promise! It’s almost Halloween, and I just can’t get it off my brain, so this week’s challenge for the League of Extraordinary Bloggers is… — Movie Monsters — REMEMBER!: The League is always open to new members! Got a blog? Write a post in response to the weekly challenge!
I've had mummies on the mind lately. It all started with this great Goodwill find. You see how I tied this right in with the League challenge?


Included in a 2 dollar grab bag I found this magnificent Playmobil Mummy! Let's risk a deadly curse and take a peak inside. 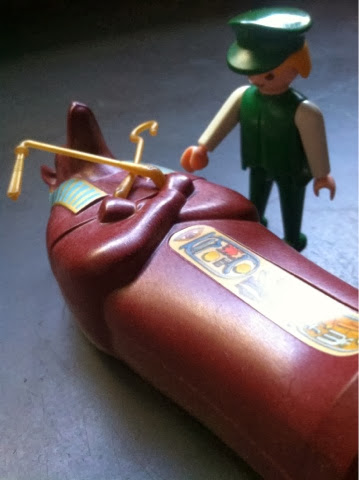 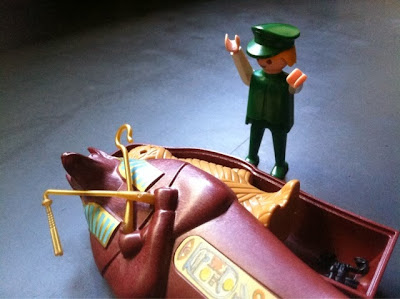 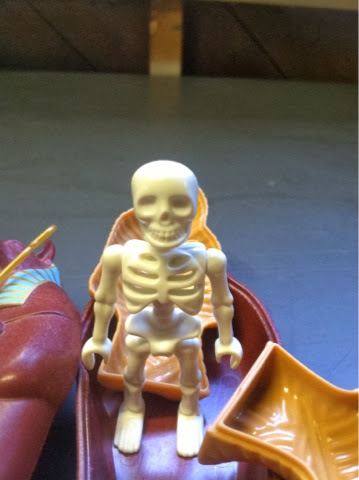 Would ya look at that, my very own Playmobil skeleton! Something must've gone horribly wrong with the mummification process! What this mummy needs is a fresh mummy minion. 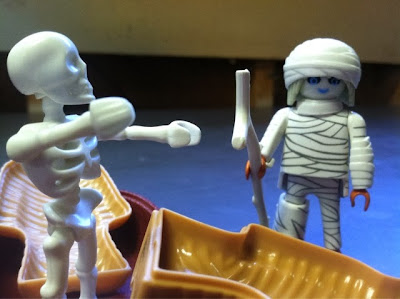 The newest Playmobil "mummy" is very strange, to say the least. He looks more like a bandaged up hospital patient. His staff looks like a crutch and his hands and feet don't even match his glow-in-the-dark face. He looks like he choked to death. Perhaps his neck brace was a little too tight. 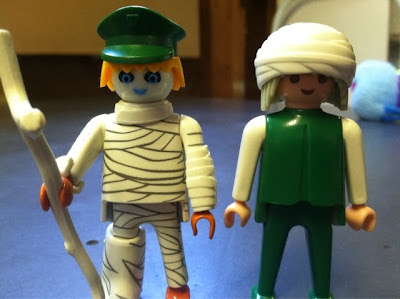 The new mummy head works rather well for custom figures.

I really wish I had some LEGO Adventurers Desert Expedition or Pharaoh's Quest sets, but I don't have a single LEGO mummy!

After I found this mummy of a find, I really wanted to watch the original 1932 classic, The Mummy. I was delighted to find it is on Netflix. If you haven't seen it and you have Netflix then watch it tonight, it's great!

This Halloween we're having a movie mummy marathon. My brother owns copies of all the Brendan Fraser Mummy movies, which are loosely based on the original classic. I know they're totally corny, but that's why we love them so much! I remember watching the Mummy Returns at the dollar theater with my brother and my friend Landon and busting out laughing at the sight of that ridiculous dirigible! I also love when The Rock turns into a giant scorpion. After his transformation he strikes a pose with his signature eyebrow raise. Pure cheese!

Now go check out what other Leaguers are bloggin' about:

Grey talks about his favorite creature, the Creature, at Achievements In Gaming.